Types Of Software Development Testing And Which To Choose

Software development testing is the process of finding errors in a software product. Testers verify and validate the functionality of an application to find whether it satisfies the specified requirements. Bugs include code errors, missing conditions, crashes, and other things that can negatively impact the user experience.

Testing is the last step before launching the program into a working version. Ideally, testing should occur at every stage of development.

It is important to make the distinction between manual and automated tests. A person performs manual testing, and automated testing is completed using AI and prescribed test scripts. The testing process cannot be automated completely. You can add automation only after a series of manual tests.

Both have their strengths and weaknesses. Manual testing is slow and boring. But its advantage is that it handles complex scenarios better. Automated testing requires coding and test maintenance. 26% of companies surveyed indicated finding the right tools for test automation as the biggest challenge they face. But the upside is that it’s much faster and covers many more permutations.

Both manual and automated testing can be used at different levels of testing. Automation saves time, resources, and money. An automated test can be run over and over with minimal effort. Everything can be tested manually, and only stable systems should be automated. Some types of testing, such as ad-hoc or exploratory testing, can only be done manually. Automated testing is used primarily for regression. 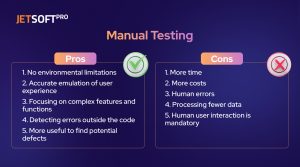 Thus, a combination of manual and automated testing is most often used on real projects. The level of automation depends on the type of project and the specifics of setting up production processes in the company.

What Are The Types of Software Development Testing?

The type of testing is chosen according to the purpose of a specific level of development.

The purpose of testing can be: 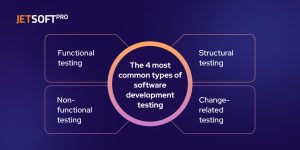 The question that should be answered by functional testing is whether the system works.

The main advantage of this type of testing is creating conditions as close as possible to real ones. The significant risk is the possibility of missing a few software logic errors when testing the program’s functionality.

Non-functional testing provides a higher level of security and ensures the loading capability of the system. Simultaneously, non-functional tests are performed again every time the software is updated.

Non-functional testing consists of many subspecies. A qualified QA team should make the decision on which subspecies to use.

Structural testing inspects the structure of a system or component, i.e., what happens inside the system or application.

This testing requires knowledge of code and testing tools. At the same time, it has many advantages. By using structural testing, possible errors can be detected at an early stage. Also, testers find and remove “extra” code.

To sum up, it’s important to remind about the goal of testing. All software must be user-friendly and not break down when data is defective or unexpected actions are performed. JetSoftPro always involves testers and QAs in the software development team to ensure product quality and market success. Our specialists will help you choose the type of testing that will meet your needs and development features. Email us to discuss details: contactus@jetsoftpro.com.